Skip to content
AUTHORS > Dimitris Sotakis > The Miracle of Breathing

An unemployed young man is looking for a job in the classified ads. Desperate because of his financial difficulties and pressed by the need to provide for himself and his sick mother, he accepts an offer of a bizarre position. All he has to do is provide his house to the company for storage space, and he will receive a handsome reward every time an item is transferred there. The deliveries begin straight away and his house gradually fills up with furniture and other useless objects. At first he is excited, but soon realizes that something is wrong. The agents of the company inform him that he will no longer be able to leave his house. Finding himself buried under innumerable objects, there is no more space for him to walk from one room to the next, he ends up with just one privilege: to breathe.

The Miracle of Breathing 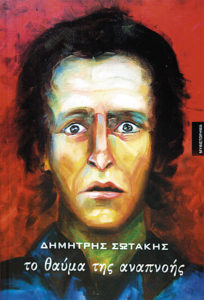