With a language that mixes the speculation typical of philosophy and the freedom of association of poetry, Marina Mariasch builds a nouvelle whose theme is love, observed from the place of crisis. Mariasch writes about love in many of its forms, she locates the axis of the story in the couple, but branches out to other edges of the matter: motherhood, seduction, temptation, fidelity, children, being single, self-worth, the idea of a home, the space marriage has in contemporary society. In the manner of a conceptual album, Mariasch establishes subtle variations on a single theme.

By accumulation, the text becomes an essay on this state –civil, state of mind– explored by naturally and deliberately articulating fictional construction and experience. Essay, novel, poetic prose, Marriage dodges fixed generic classifications, taking notes from each one.

“Guilt, the weight of personal failures, the fear of heartbreak and loss, job insecurity, the assumption of unsatisfactory gender roles, the fear of not measuring up:…a lyrical meditation of unusual beauty.” Patricio Pron, El País

“The home in Marriage is the key to its strange narration: with it the protagonist sustains herself and flees from it; sometimes home is shown as a tree, sometimes as a cave, or as a fancily named tower in a residential neighbourhood.   Marriage is a unique, beautiful piece that works like a black light bouncing inside the walls of a family home.” Mercedes Halfon, Pagina 12

“Mariasch takes a married couple (husband and wife) and applies the biology class treatment with frog dissection, however once the scalpel is inserted into the animal’s green belly and the viscera come out, many more things appear by surprise: the piñata of a party that was going to be fun but in the end it wasn’t.” La Nación

“…at first glance, a book about the politics of the domestic…the text reflects more on the institution [of marriage] than on love. I dare to think that it is, ultimately, a narrative about heartbreak.” Clarín 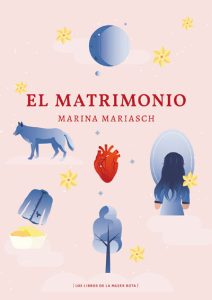