Vitor Flanegan left Santa Cruz de Bolivia because his mother had died when he was young and because, as he became an adult he understood that leaving was the only way of not becoming his father—a violent alcoholic man who struggled to overcome the death of his wife. Twelve years after leading an erratic lifestyle in the United States, Vitor returns home after having lost touch with the people he once loved. Three women represent his entire past life: María, his father’s widow, a substitute mother of sorts and a silent witness to his family’s dissolution; Fabia, Vitor’s sister, who resents him for having disappeared on her; and Laura, his old girlfriend, now married to someone else. La desaparición del paisaje is a novel about guilt, identity and what it means to outlive the people we love and the loneliness we are forced to bear.

“A radical novel in its own realistic way… it unambiguously recounts the very harsh emotional wounds of the characters, especially those of its protagonist and narrator, through a very direct style, not exempt from a very subtle poetic capacity, which neither embellishes nor sweetens the narration, but rather produces a greater sensation of rawness if possible, the warmth of the emotionally devastating.” Colofón Revista Literaria

“Undoubtedly the most interesting thing about La desaparición del paisaje is the oppressive climate that Maximiliano Barrientos achieves by critically recreating a masculine universe that attacks the concept of the macho man who always imposes himself with violence, even to the point of being self-destructive.” Radar Libro

“How things break down and how they do so irreversibly.” El Pais/ Babelia

The Disappearance of the Landscape 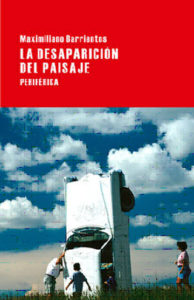