After nine months of self-imposed isolation following his wife’s departure, the hero of Seven Terrors finally decides to face his loneliness and join the world once more. However, when the daughter of his old friend Alex appears in his flat one morning with the news that her father has disappeared, he realises that his life is again about to change. As the two search for clues in Alex’s war diary, they come upon tales of unspeakable horror and mystery: meetings with ghosts, a town under siege, demonic brothers who ride on the wings of war, and many more things so dangerous and so precious that they can only be discussed by the dead. As investigation into Alex’s disappearance continues, readers are drawn further and further into a surreal world where rationality has vanished, evil spreads like a virus and not even love can offer an escape. While Charon, Hades mythical ferryman, can be found behind the wheel of a taxi and dead horses are seen flying across the sky, cracks begin to erode reality and people start to go missing. Here, amidst such chaos, our hero endeavours to cling to his sanity, doing his best to solve the riddle of Alex’s disappearance while attempting to save his own soul and bring love back into his life. 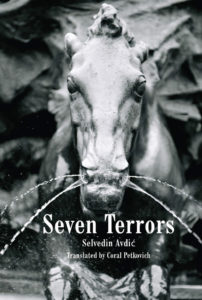