Miran returns to his post-war town following an earthquake and a great flood. He attempts to lead a quiet life in the shabby block of flats, alongside his vivid memories and colourful neighbours. He starts a love affair with Verena, ex-wife to the Banana King who, alongside Honda, an angel in a leather jacket, makes for a mere fragment of the powerful mosaic of idiosyncratic characters that make Avdić’s A Drop of Happiness.
Miran’s first-person narrative develops alongside the omniscient voice of Hotel Metalurg’s maître d’, in a town which is the ‘cradle of the proletariat’. The two men tell countless stories – stories about darkness, about the open gates of the hellish underworld which has found its way into people’s heads, about the evil which grows and threatens, about the fall of civilisation, anxiety and paranoia, about humanity’s fear of uncertainty, masked as an apocalypse or a dark future. A meeting point between a dazed mind with the refined aesthetics of David Lynch, a mix of personal memories and a pinch of nostalgia for the progress and optimism of the socialist period.
A Drop of Happiness is a nest of symbols and signifiers, Selvedin Avdic has once again composed a novel which bends genre definitions, as well as the boundaries of the language in which it was written.

A Drop of Happiness 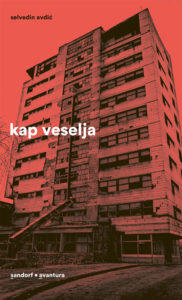