The incurably clumsy David Badenbauer, a relatively young orphan of a family belonging to an eccentric and minor branch of Judaism, believes himself to be a sceptic. A neurophysiologist who is lonely and in need of affection, he approaches, via a love interest, the most “woodyallenesque” psychoanalysis experience. Something he deplores but that will force him to confront all he has evaded for decades. His story is one of reintegration into a community and into a tradition of knowledge. The possibility – and the necessity – of knowledge is approached from several fronts: there are the neurological investigations that the protagonist tries to develop, his own personal adventures, and, finally, the “self-help” writings that are rather philosophical and cosmological speculations. Badenbauer does in fact end up writing an improbable self-help book whose scope would make the most ambitious of gurus pale.
Death, the mystery of consciousness or the inexorability of entropy, how we perceive the world, are explored here in a journey that is as intimate as is universal. To achieve his goals Badenbauer must find refuge in the exercise of irony and reflection, where the best of his qualities are expressed.

WINNER OF THE NATIONAL LITERATURE PRIZE 2022

From the French press on Scipio and Middle Age:

“Scipio, the superb novel by Pablo Casacuberta, manages to renew, with talent and communicative exuberance, the old Oedipal drama of the father-son relationship by relying on a very acute sense of funny situations”. Pierre Lemaitre, Le Monde Des Livres

“In this funny and offbeat book by Pablo Casacuberta, one of the most interesting new voices in South American literature, there is only one winner, the reader”. L’Humanité

“A coming of age novel so original, poetic and hilarious. An excellent book that will delight the many readers of this talented writer”. Que tal Paris

“Master of the quirky humour, Pablo Casacuberta succeeds in a disheveled comedy on the crisis of the fifties and the fear of death. It confirms his virtuosity.” L’Humanité

A Life Full Of Purpose 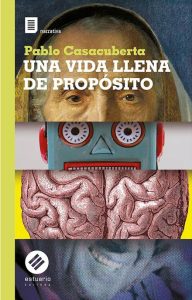