One. A young Guaraní woman tells of the curse of having given birth to twins – according to local tradition, an unequivocal proof of adultery. Her visit to the hospital for a caesarean section and the subsequent convalescence at her sister-in-law’s house are mixed with the longing for the simple life, childhood and virginity.

Two. Demut, a German girl at the beginning of the 20th century, runs away not only from the hunger and misery of central Europe, but also from the looks she gets because of the emerging incestuous relationship she maintains with her brother. An epic journey takes her to a German community settled in Misiones, in north eastern Argentina.

Three. Adriana, an arts student, has managed to gain relative economic independence in the city she chose to study. She is self-sufficient in a broad sense: she talks to herself, keeps a journal, maintains a distant bond with her mother, and has space to sustain a couple of relationships with painters of different pictorial and lovemaking abilities.

The stories of the three lives (one tragic, another brave, the third comic) explore, in their uniquely private languages, the sexual development of their protagonists. Three visceral stories about aspects of female sexuality (virginity, incest, orgasm) related through the invention of an oral language that is endearing, poetic and at times humorous. Marina Closs unfolds three distinct monologues, handling both irony and a sober lyricism to give shape to these three furies.

Tres truenos was awarded in 2018 the First Prize from the Fondo Nacional de las Artes, by a jury composed of Florencia Abbate, Selva Amada and Luis Sagasti.

“I approach these three thunderbolts like a woman dazzled by the force of nature. […] Marina Closs’s clean style… instead of the traditional imaginary of punishing the intrepid, sets her characters free and leaves them blameless: three thunders that we look at with the admiration and respect the storms awaken.” Marta Sanz, Babelia, El País – October 2021

“Three women whose voices carry the force of the sound of lightning. Three stories full of intensity, of experiences in which fear, guilt and desire intermingle. Marina Closs’s writing trembles, sweats, explodes: she is, of course, one of my favorite writers.” Mónica Ojeda

“Tres truenos is a novel made up, in turn, of three short novels, self-conclusive but complementary: the three are installed in the same narrative, that of the violence that the world (an eminently patriarchal and abusive world) imposes on the protagonists. […] In the stories of Marina Closs there is an awareness of the world that is poetic and violent, strange and distant. Through the voice of the protagonists, the writer achieves a wonderful singularity, in a trio of voices that are basically the same […] Tres truenos… is related to novels like Eisejuaz and Enero by Argentinean Sara Gallardo. In the second and third parts I venture to suggest certain connections with works such as Nadirs, by Herta Müller, […] and Las primas, by Aurora Venturini. If I bring these links to light, it is because I have seen in all of them, and in Marina Closs’s novel, a very lucid and intelligent way of generating a language of distance.” Alejandro Morellón, Cuadernos Hispanoamericanos, Octubre 21

“Tres truenos, a devastating cannonball against a way of being a woma. […] It is in the subtle choice of words that Marina Closs reaches excellence… imitator of Anglo-Saxon modernism in her very first literary steps, […] able to experiment with the language while remaining bloody clear. Lethal.” Eugenio Fuentes, El cuaderno digital, Octubre 21

“We are not facing a book of independent stories, although they are not connected in their plots, but through their musicality and a very subtle game of correspondences. […] After finishing the book, the feeling that remains is that of a highly calibrated text and, nevertheless, alive. Highly recommended.” Nadal Suau, El Cultural, Octubre 21

“In nature thunder comes after light, but here it is a bit the other way around: these three powerful stories bring with them three flashes that illuminate three possible experiences, more or less, in the history of women in Argentina.” Juan Marqués, ‘Las Librerías Recomiendan‘

“A beauty of a book. It has an austere but very effective language. Awesome”. Julieta Venegas

“The best scenes in Marina Closs’s literature are played in a Beckettian beat, with a comic grimace that emerges with freshness to immediately go on to tighten the muscles of the face, by stripping the absurd, the terrible, of existence….There is a common atmosphere in…[Closs’s works]…, a village-like strangeness connected with the narrative portraits of Elvira Orphée (in Aire tan dulce, for example, from 1966) or…even in the extraordinary Eisejuaz by Sara Gallardo. But there is also something new and organic, something unique and powerful that I hope we will continue to receive…for many more years…” – Ana Ojeda

“Blood occupies a cursed space in Marina Closs’s storytelling, and that is why in her text there is a constant question about what a woman is built on, what makes a woman a woman, fertility? Giving birth to children? To have orgasms?… Undoubtedly, it is the language that the author uses her greatest success: the mix of oral arguments and descriptions provokes such astonishment and wonder in the readers, leading them into the psyche of these three women.” – Revista Ñ, Clarín

“Closs does something really clever. She realizes that writing about sex requires not treating it as a generic subject in which the experience passes to the reader because it is “universal” in the most pedestrian sense of the word. The women of Closs speak of a particular, untransmissible experience, between sublime and frightening, but always protected by the author’s humour and pleasure for writing.” Quintín, La agenda 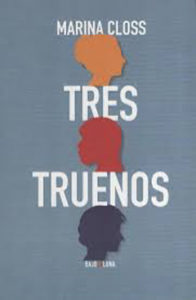