Ramón is tired of noise and everyday life. He works in a factory, lives in a precarious settlement and he really has had enough. So when the opportunity arises, he accepts a peculiar job: to look after a huge Coca-Cola sign located near his settlement, by a large highway. Observing the huge space of the structure that supports the billboard, he decides to make that space, between the two sides of the billboard, his new house. There, from this elevated position he begins to look in the air for the meaning of things, a meaning that he cannot find on the ground. His girlfriend Paulina and his nephew Miguel start visiting him and will report about the neighbours declaring Ramón a madman, someone who is bringing shame to the neighbourhood honourability.

The arrival of a group of homeless people in the vicinity of the settlement triggers a state of tension between them and the inhabitants of the area, unleashing the anger of this latter group. A tragic event, the disappearance of a boy from the settlement is the perfect excuse for the past to repeat itself and the neighbours to unleash their accumulated anger.

Using sharp humour, poetic language, and a deep understanding of child psychology, Ferrada portrays a society that in the name of peace is not afraid to use violence. And of a group of characters that try to be more aware about the threads that guide the behaviour of stars and men. Do these threads exist?  Managing to find light in a world where cruelty and absurdity spread like a dark cloak, the question about the meaning of things and the right to seek it, is what the characters in this novel try to answer.

“Icing on the cake, a brilliant Spanish shines throughout the text, dispensing sensory marvels with an unusual dexterity. María José Ferrada has an exceptional talent and enough courage to face the most ambitious challenges. El hombre del cartel is a major work.” El Imparcial

“Italo Calvino and Uri Costak broke the narrative tradition by moving a character off the ground, with clear allegorical components. The most valuable aspect of El hombre del cartel is the profound social criticism that emerges from the renewed use of this procedure, validating the diaspora as the only means of escape from the established order.” Revista Santiago

“… the true miracle is not that Ramón moves to the billboard, but that the reader ends up assuming his attitude as perfectly coherent and logical … Priceless.”Diario Montañes 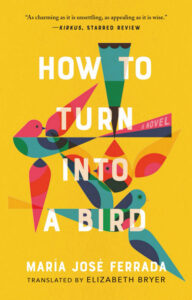