María José Ferrada‘s (Temuco, Chile, 1977) children’s books have been published all over the Spanish speaking world as well as internationally and have been awarded numerous prizes. Kramp (2017), her first adult novel, was published in various Latin American countries and in Spain. It was translated in Italian, English, German, Brazilian Portuguese, Danish. It will soon be published also in France, Hungary, Poland and Turkey. 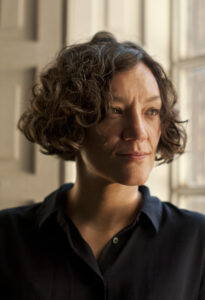