Considered one of the top novels of the Latin American avant-garde by authors such as Enrique Vila-Matas and César Aira, this exceptional work is written in the manner of a life diary in which only the first day is recorded of each month, except for December, which is also credited on the last day, in order to close the story. Insects that devour the letters of books, an unclassifiable travel diary or telephones that remain glued to the ears converge in this very singular narrative, where small circumstances of daily life acquire unsuspected meanings by being strung together with a humor that is as absurd as is melancholic.

In San Agustín de Tango, you can never be sure what’s waiting around the corner. Over the course of a single day – the day before today – the hero of this novel and his adored wife embark on a journey through the absurd and the surreal, encountering a choir of monkeys and a carnivorous ostrich, travelling from the studio of an artist obsessed with the colour green to the waistcoat pocket of a potbellied man. All the while, the tolling of the bell in the city square pushes their whirlwind adventure towards its fateful conclusion… Ayer is a hilarious exploration of the absurd in everyday life.

“Juan Emar, the Chilean writer who bears a marked resemblance to the monument to the unknown soldier.” Roberto Bolaño

“This forerunner of them all, in his serene delirium, left to us as testament a living world populated by the unreality that is always inseparable from the most abiding reality.” Pablo Neruda

“And there you had the madman Juan Emar writing the real Chilean prose. We have to start with
him, even if no one has read him.” Alejandro Jodorowsky 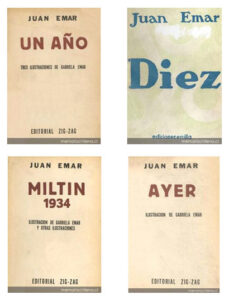