One Friday night, Karina — a twenty-five-year-old physicist trying to reconcile relativity with quantum mechanics — finds her grandmother Rebeca completely drunk in their shared apartment south of Mexico City. The nonagenarian inadvertently reveals that she has been keeping a secret from her granddaughter for two decades. What is the secret about, and how is it related to the large fire in the cemetery where Karina’s parents are buried?
On May 28, 2029, during a heat wave, flames consume the Chapultepec Forest, the park where the Pantheon Dolores and the city’s zoo are located. It does not appear to have been an accident: the fire started with the bonfire of a man dressed as a priest in the pauper’s grave of the cemetery. In addition to this incomprehensible crime, almost all the trees in the park and the animals in the zoo die in the fire. From there, the story of Rebeca and Karina intersects with that of Silverio, guardian of the pantheon and absent father to the precocious climate and ecological activist Daenerys. These four characters embark on individual paths of reinvention that have to pass through the solving various enigmas: who was the burned priest in the Pantheon, how did Rebeca get the bottle of brandy with which she got drunk, what happened to Karina’s parents eighteen years ago, how do sharks mate, what will be of the emu egg that was saved from the fire, what role does time play in the expansion of the universe, who is the nocturnal predator that haunts the cemetery.

A novel populated by suspense and by the animal world, by addictions and family crises, by ghosts, gyms, climate crisis, black holes and disoriented masculinity, Este vacío que hierve (This Simmering Void) uses mystery, romantic parody and the chronological alteration of the story to explore the reality of the cosmos as well as the psychic, social and natural turbulences of the present.

“Only a powerful voice like that of Comensal could manage to take us to a near future, alert us about climate disasters while infecting us with his passion for science and the co-dependent relationships of his characters. All this with the perfect doses of black humour and a profound tenderness.” Mayra González Olvera, Alfaguara

“With its themes of femicide and climate protest, this is one of the most current new books from Latin America. Literary, plot-driven, touching.” Margit Knapp, Publisher, Rowohlt Verlag 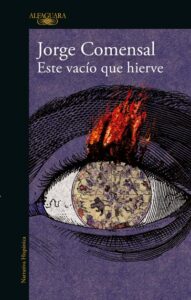