Damir Karakaš novel follows a young rockabilly fanatic at the end of the Eighties. A failed student who cares deeply about his pompadour hairdo, symbolic of his desire for an identity shift away from his peasant roots, and which he wears with obsessive, vain pride. The quiff is his crown, his best self. Charlie searches for mirrors in the street in order to admire the quiff at all times, has located shop windows that reflect the quiff at particularly good angles, spends much time grooming it, and has even devised a way to sleep (with three carefully positioned pillows) to minimise quiff ruffle. And it is this very hairstyle that his father, a man so violent that he borders on psychopathic, hates with a vengeance. By the end of Chapter 1, following a bloody fist fight between father and son, it is clear that the claustrophobic and violent darkness that looms over his childhood home, and Yugoslavia at large, will eventually devour Charlie and those of his generation.

Blue Moon talks about the inability of a world that is approaching a new war, to self-reflect. The arteries of the novel are themes of masculinity and violence, and the traditional, conservative attitudes towards difference. This of course, leads to the theme of war, the looming undercurrent that Karakaš masterfully weaves around the story, drawing a stifling darkness around its edges and building up the pressure in ways that are simultaneously surreal, humorous and suffocating. Blue Moon is a poignant picture of the effects of collective and individual violence, but it is Karakaš’s humour which gives it a unique edge – it provides the much-needed spoonful of sugar to the make the acridity of war go down. 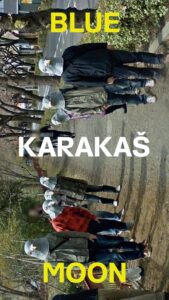