In a small town on the Adriatic coast, a local detective is content to sacrifice truth for the sake of telling his clients the stories they want to hear. The Coming reads at first like a traditional detective novel, then suddenly changes form with the advent of snow in mid-summer. When the town library burns down under mysterious circumstances the detective’s long-lost son begins to get involved in the investigations from afar. With excursions into history and tales of the lives of Fra Dolcino, a medieval heretic who announced the return of the Messiah and of Sabbatai Zevi, a Renaissance cabalist, who maintained that he himself was the Messiah, we dive into a world of unsolved mysteries of both past and present. Firmly set in an atmosphere of impending apocalypse (floods, a snow storm) where aspects of Christianity collide with otherworldly presences, The Comingw as the second in Nikolaidis’s ‘doomed generation’ trilogy (a metaphor for the lost generation of the Yugoslav war). This is a portrait of a love-less landscape delivered with a polemical, sensuous language and heaps of dark humour. 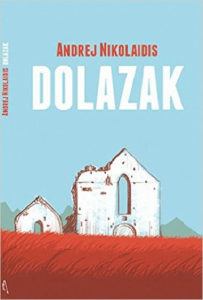