Kintsugi is the Japanese craft of mending broken ceramic with gold and platinum, thus emphasising the cracks and suggesting how our scars add to our physical beauty because they map out our histories and trajectories of life. In the centre of the novel is a body. A body of a young girl who is trying to understand what being a woman means, a body of a woman trying to keep herself whole despite being broken into fragments by illness. A body as a battlefield for life and death.
Three main threads explore womanhood: the main narrative tells the story of breast cancer, chronologically, from diagnosis, via numerous surgeries, until full recovery two years later. In the centre of this narrative is the body, the way it is treated in the medical environment, the way it loses its privacy and intimacy when it is dealt with as a mere object. The second thread is made up of fragments of childhood memories, of a girl coming of age, where the seeds of future unhappiness are sown. A deconstruction of the moments in time when the young girl is gender casted and starts to see herself as the Other. The third narrative is populated by female archetypes (Medea, Medusa, etc…), long lost mothers who visit the protagonist in dreamlike episodes, counterpoints of female power.
What femininity is and how it is perceived in the physical and emotional world is the novel’s greatest theme. Does the female body remain female once the feminine organs (or the reproductive system) are no longer there? While talking about illness and contemplating death, Marić’s tells a defiant story about love of life, and the ability to overcome fear.
Written in the second person, and in a lyrical to sparse tone, with the poetic elements beautifully measured and simple, Body Kintsugi is an optimistic story of survival and rebirth, and a journey into the historically complex perceptions of femininity and its relationships with sexual and worldly power.

WINNER of the Mesa Selimovic Award for best novel, 2019

‘A raw and moving book, written in exquisite, taut prose, which explores illness and healing through an inventive, kaleidoscopic narrative.’  – Sam Mills, author of Chauvo-Feminism and The Fragments of My Father

‘As a revelatory account of illness, the novel stands alongside Anne Boyer and Audre Lorde, while the sensuous intelligence of the prose, in Celia Hawkesworth’s astonishing translation, reminded me of Virginia Woolf. It’s a wonderful book.’  – Caleb Klaces, author of Fatherhood

“Senka Marić’s style is poetic and minimalist, she uses realist narration techniques, writing the novel
with her body. The novel’s protagonist wages her personal war against the illness, but this book is not
just about being ill, it is also about struggle for dignity, sensuality and eros. It is not enough to say that
this text is combative, the pleasure it offers also lies in poetic observations which turn strokes of the
surgeon’s knife into strokes of the brush on the canvass. However, it does suffice to say that Body
Kintsugi is a brave book based on personal experience, that offers us much needed hope in the victory of life over death.” Faruk Šehić, author of Under Pressure and Quiet Flows the Una

“Operating within Bosnian-Herzegovinian literature which isn’t particularly keen on écriture féminine, in
which it resembles other post-Yugoslav literatures, Senka Marić manages to subvert the patriarchal
literary canon and establish a new pattern which opens up the space for women’s writing, a literature
much more thoughtful, direct and courageous than the one written by men. In that regard, Body
Kintsugi is a literary incident, a novel which banks on its utter lack of compromise or pandering to the
reader.” – Srđan Srdić, author 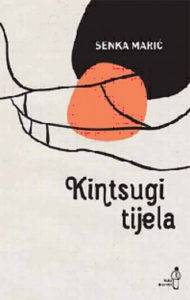