La mediana edad introduces us into the labyrinthine mind of Tobias: a fifty-year-old who lives with his mother and suffers from hypochondria. This double condition of always feeling sick and living isolated with his mother, plus the void left by an absent father -the circumstances of whose death are revealed to us and to our hero only at the end- has led him to develop an extreme dependence on his family doctor: a homeopath with a vast clientele of mostly old ladies, who completely disbelieves the efficacy of his own preparations.
Developing over the course of just one -very long- day, the story zig-zags between a series of grotesque episodes in the life of Tobias and the multiple thought associations of his mind, until a surprise moment unleashes an unexpected turn of events. A philosophical novel and an atypical Bildungsroman, where with linguistic virtuosity and a great sense of humour, Casacuberta confronts the eternal tensions between the world of ideas and beliefs with that of factual truth and scientific thought.

WINNER OF THE NATIONAL LITERATURE PRIZE 2019

“A coming of age novel so original, poetic and hilarious. An excellent book that will delight the many readers of this talented writer.” Que tal Paris

“Master of the quirky humour, Pablo Casacuberta succeeds in a disheveled comedy on the crisis of the fifties and the fear of death. It confirms his virtuosity.” L’Humanité

“Composed largely as an introspective monologue, this coming of age story is a burlesque comedy, the humour of which is mainly due to the discrepancy between the precious language of the narrator and the triviality of certain scenes, described with a tasty emphasis.” LE MONDE DES LIVRES 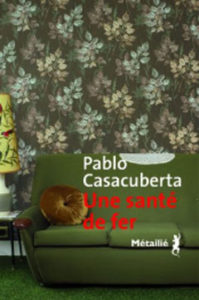