The protagonist of this novel is not Scipio – the Roman general hero of the Carthage campaign and conqueror of Hannibal in 202 BC – but that ancient history is not entirely absent from its plot. Aníbal Brener, the son of a prestigious historian, a specialist on the History of the Roman Empire, has always had a troubled relationship with his father. An historian like him, Aníbal has gone from failure to failure until finally he is outdone by alcohol and depression. Two years after the death of his father – whose funeral he missed – he receives the news that the will leaves him with much of his father’s property, provided that certain conditions are met. Narrated by Aníbal, the novel is a gripping investigation of the tensions present in a father-son relationship where love and hate, authoritarianism and humiliation, envy and cruelty co-exist. As in Casacuberta’s previous novel (Aquí y ahora), this is a coming of age novel, even though its narrator is an adult, one who has refused, or has not managed, to grow up. His story is a tale of discovery and of healing: the discovery of the father’s own fragility and of of the character’s own voice, an identity that can only be defined as a reflection of the relation with the father. Escipión shows us an author at his full creative maturity. One that comfortably tackles a universal theme of strong classic resonances with irony and a kind of humour that elevates his discerning ability.

“Scipio manages to renew, with talent and communicative exuberance, the old Oedipal drama of the father-son relationship by relying on a very acute sense of funny situations”. Pierre Lemaitre, LE MONDE DES LIVRES

“In this funny and offbeat book by Pablo Casacuberta, one of the most interesting new voices in South American literature, there is only one winner, the reader.” L’HUMANITÉ

“The text, as in the best Philip Roth, explores the notions of success and filiation, while always shaking up stale assumptions” Le MAGAZINE LITTÉRAIRE

“Told with Anglo-Saxon humor, Pablo Casacuberta’s novel is a pure delight, from start to finish.” TÉLÉRAMA 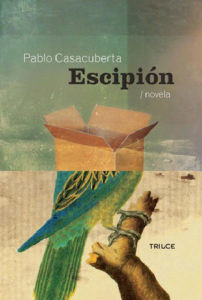