Lazarus works in a museum. He photographs desiccated insects, which he then carefully places in prepared scenarios simulating certain vitality.  The train on which he is travelling with destination unknown, enters an absolutely black tunnel. Why does the train stop? And who is the mysterious woman that appears to Lazarus in a lens store? Everything is guarded, everything is closed in Lazarus’ world. A man capable of putting all his hopes in an image, a projection of his own mind, as if it were possible for one’s own interior darkness to be the force to show the way towards the light.

“With El Mar (The Sea) Pablo Casacuberta continues opening the doors of perception, shaping the invisible through an almost magical use of language” – Mario Levrero

“Direct, visual language, tremendously persuasive, connects the initial realism of the plot with a specific area of the fantastic, and then moves on to a symbolic level, thus multiplying possible readings” – Mercedes Estramil 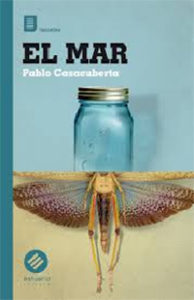