Defeated and humiliated by the swift decline of his career as an Olympic swimmer, Adler Zweig has no other option but to consider how to rebuild his life. When he receives though the mail a photograph of Klaus, the brother he has not seen for over a decade, this raises the possibility of a meeting in a desert somewhere in northern Colombia. That’s where Klaus works as a diver for an oil rig. The person who sent him the picture, Cora Baumann, is an old friend from his childhood, and the ex-girlfriend of his brother. The meeting between Cora and Adler, which at the beginning is focused on the arrangements for the trip to the desert, soon unleashes a meticulous reflection on his own past and the devastation of his childhood but also the love that he has been repressing for Cora Baumann, which will end up costing him dearly.

Written with precision, the story of a truncated reunion between two brothers unfolds between the frigid streets of Berlin and the sweltering, inhospitable terrain of Colombia’s Guajira desert. Echeverri Benedetti explores the void that opens up in our lives when we lose our anchors (parents, jobs), via two characters unable to stop the inevitably downward spiral of their lives, a final destination they seem well aware of. Besides arbitrary violence, the invisible threat and the tense, sinister mood lingering over these lives is that of the illusion of free will, of forging one’s own destiny.

“Criacuervo displays a seductive power inviting you to read it aloud. Perhaps because of its poetic and taut language or the hypnotic eloquence of its images, it is a novel that leaves an indelible mark on memory.” Héctor Abad Faciolince

“Orlando Echeverri Benedetti uses the metaphor of the desert to explore rootlessness, the void in our lives when we know where we come from, but not where we belong.” – Vísperas (Spain)

“The second novel by Orlando Echeverri is positioning him as one of the most original voices of the new Colombian narrative. For this reason, we highly recommend this strange and amazing story published by Angosta Editores.” – Martin Franco, Revista Soho, Colombia

“The characters of Criacuervo are marked by transhumance and helplessness. In precise, controlled prose, the story of the Zweig brothers confronts the reader with the senselessness of emotional ties and of violence.” – El Espectador, Colombia

“Criacuervo is a leap into the void, an ode to fate, a nod to the forgotten tragedy of living life with no ambition other than getting lost in it.” – El Tiempo, Colombia 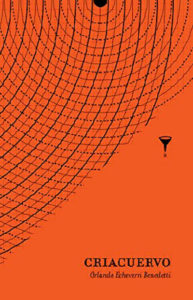