In the middle of the Chilean dictatorship, an anguished man arrives at the offices of an opposition magazine. He is an agent of the secret police. I want to talk, he says, and a journalist turns on the tape recorder to hear a testimony that will open the doors of a hitherto unknown dimension. Following the thread of this real episode, Nona Fernández activates the mechanisms of the imagination to access those corners where neither memory nor archival documents are able to reach. Confronting her own experience with the stories of the man who tortured, the narrator enters the lives of the protagonists of that ominous testimony: that of a father who is detained in a van while taking his children to school and that of a child who changes names and lives to end up witnessing a massacre, among others.

“The Twilight Zone is wildly innovative, a major contribution to literature, in Chile and beyond, that deals with trauma and its aftermath … It is a superb way of making familiar the unimaginable experience of torture and pain, helping her haunted readers descend with her into the blaze of history.” – THE NEW YORK TIMES

“In this hybrid work of fiction, rigorous journalism, and memoir full of wide-ranging cultural and literary references, Nona Fernández helps us glimpse the horrible reality of torture—and the even more terrifying way it becomes routine—in luminous prose of great intelligence and obsessive sincerity.” – Fernanda Melchor, author of Hurricane Season

“There is an incantatory quality to Nona Fernández’s The Twilight Zone, a feeling of walking, as though under a spell, and then accidentally tripping into the murky unknown.” – Staff Pick – THE PARIS REVIEW

“Set during Pinochet’s dictatorship, this engrossing novel invites readers into the dark portals of history where the people and stories erased by repressive regimes are finally illuminated.” –  Chicago Review of Books

“Nona Fernandez has stirred up the pot of Chilean literature like no one else writing today. In The Twilight Zone, she shows why the emotional toll of the Pinochet dictatorship has yet to subside, why any country that denies the crimes its police forces have committed remains a country stewing with dishonesty. ” – Idra Novey, author of Those Who Knew

“A startling work that is to become a classic of Latin American letters.” – El País 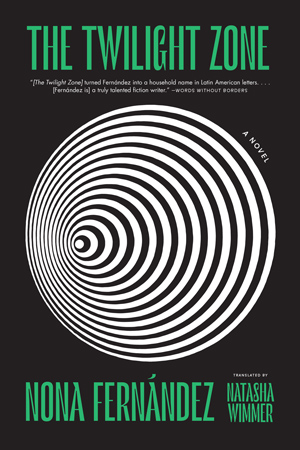