Santiago in the ‘80s: a group of teenage students cannot forget a classmate who has not been seen in school for long now. She was the daughter of a police detective who has been accused to have committed several atrocities during the years of the dictatorship. The voices of the students alternate each others in remembering their classmate, even in their dreams. In the context of the resurfacing of the memory of the violent years of the Chilean dictatorship and in short hypnotic and rarefied chapters, Fernandez builds a story that sits between dream and reality and questions which is which. The space invaders are the aliens from the adult world advancing towards the children via the dissemination of death and destruction and forcing them to question the nature of experience.

“Space Invaders by Nona Fernández is a small jewel of a book, set in Pinochet’s Chile. This dark time is chronicled through the light of childhood memory, mysterious yet precise. Fernández’s picturesque language and dream-like atmosphere is well worth being invaded by. A book to slip in the pocket to read and reread.” – Patti Smith, best books of 2019, The New Statesman

“Space Invaders is an absolute gem—a book of uncommon depth, precise in its language, unsparing in its emotion, unflinching as it evokes a past many would prefer to forget.”—Daniel Alarcón

“A dark and deceptively playful novel about a generation of Chilean kids who try to understand the terrible country they live in.”—Alejandro Zambra 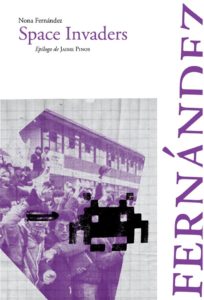