Mapocho tells the story of the return to Santiago of the young ‘la Rucia’, a suffering soul answering the call of her brother, ‘el Indio’. Since childhood, both have lived with their mother somewhere along an undefined Mediterranean shore, a place to which they have come after leaving a Chile under dictatorship. Fausto, their father, and a high- school teacher turned historian who stayed behind in Santiago writing a multi volume history of Chile, is believed dead by his children, for so their mother said. The siblings have then been forcibly separated by their mother to avoid incest, but one day after her death ‘el Indio’ gets in touch from Chile and asks ‘la Rucia’ to go back to him and to their native family home.

The first novel by Nona Fernández is an intense and risky text, a story of surreal dreamlike shadows, in which characters wander between life and death, truth and falsehood.

“Mapocho is one of those novels boldly disassembling the national mythology. Nona Fernandez presents a grotesque (but tender) Santiago, where all the times and the victims that the dirty [Mapocho] river has not managed to wash away, end up. With amazing dexterity, the narrative tries to put things in their place” – Lina Meruane 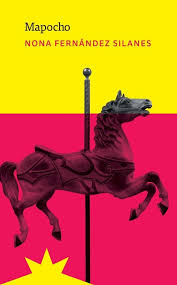