A writer of TV soaps discovers by the trash collection point near her house a discarded picture depicting a man in martial arts garb. In its grainy quality she seems nonetheless to recognize her father, who she has not seen since just a child.  So starts a search for the long missing paternal figure where family history mixes with the tragedy of the military dictatorship. Love, Revenge, Death, A Small Child, Other Materials are the everyday ingredients the writer employs to structure her own TV series writing and – like in a game of fictions – these are the elements through which the novel develops. We delve into the narrator’s past by in turn following a familial love story, an investigation on the moral stature of those who fought against the barbarism of the repression, the price they had to pay… until the sudden loss of consciousness of the narrator’s son, urgently hospitalized, brings everything back to the present.  With great narrative talent, the author of Fuenzalida carries us through a maze of incredible interlaced stories that seem to say that it is impossible to close one’s eyes to the memories, whether personal or collective. 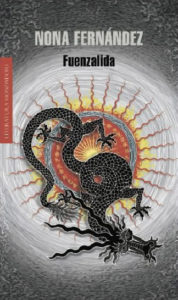