After the dissolution of Bolivia and the rule of law, brigades massacre each other in order to take control of the Eastern provinces. Two brothers flee from the henchmen of El General, a former military official known for practicing cannibalism. Once the years of collapse are over, the Camba Nation is formed and a barren peace is imposed. Two members of the intelligence services are in charge of hunting down war criminals turned dissidents and to do so, they recruit one of the brothers, now a mature and cynic man. Together they travel to a deserted neighbourhood in southern Santa Cruz in order to carry out an act of revenge that throws us back to that “no man’s land” where this novel begins. With a dry, lyrical prose, En el cuerpo una voz captures, both in its realism and its delirium, the normalization of extreme violence and its effects on the lives of those that survived it.

“En el cuerpo una voz is a sobering, consciousness-raising novel. It is a sample of Bolivian science fiction that asks questions and makes us infer answers. It is an example of innovative literature in the Andean country.” Iván Rodrigo Mendizábal

“The harshness of the plot and the precision of the language are reminiscent of Cormac McCarthy’s modern western”. Revista Otra Parte

In the Body, a Voice 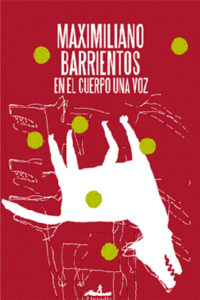