Maximiliano Barrientos was born in Santa Cruz de la Sierra, Bolivia in 1979. His short story collection Diario (2009) received the Santa Cruz National Literature Prize. His first two books, Los daños and Hoteles were edited, revised and transformed into the short story collection fotos tuyas cuando empiezas a envejecer and the novel Hoteles. Both titles were published by Periférica in 2011. In 2015 he published La desaparición del paisaje, also with Periférica as well as the collection of short stories titled Una casa en llamas, published by Eterna Cadencia in Latin America and Spain, and by El Cuervo in Bolivia. He lives in Santa Cruz.

“I don’t know if there are writers this daring in Latin America”. Mariana Enríquez 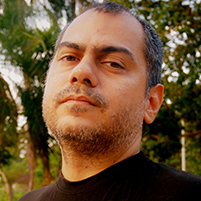