Marina Mariasch was born in Buenos Aires in 1973. She currently is a University professor in Argentine and Latin American Poetry as well as in Creative Writing. Mariasch hosts or has hosted radio and television programs on literature on various channels. She has published several volumes of poetry collected in 2014 under the titles Paz o amor (Peace or Love, Blatt y Ríos). Her stories have appeared in various anthologies and her essays have been published in different volumes, such as ¿El futuro es feminista? (Is the future feminist?, Le Monde Diplomatique + Intellectual Capital, 2016). Her novels are El matrimonio (Marriage, Bajo la luna, 2011), Estamos unidas (We are united, Mansalva, 2016) and Efectos personales (Personal Effects, forthcoming in 2022 with Planeta Emecé. In addition to being a writer and teacher, she is a human rights activist. 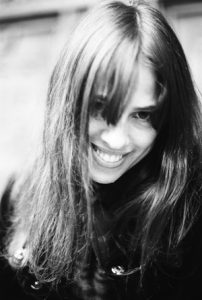