(Tre Mogli – Rizzoli, 1967)
Ferdinando Rivasecca is locked up in seminary after a physical disability that affects his sexual activity. Instead of being discouraged he prepares to conquer the world by taking advantage of his condition. All around him and his quest for emancipation, is the role played by the historical period in which he lives: post-unification Sicily. Ferdinando works patiently to subvert social expectations (the impairment that so seemed to have damaged him) and ends up with three women. Each, with different roles, will establish a series of difficult and ambiguous relationships. Di Falco narrates of Diomira who just wants to scale the social ladder, Giulietta who is always looking for an impossible love, and Ofelia only interested in making money. Each of the four characters’ efforts will be useless for the changes caused by the war. And to come forward will be the new generation embodied by the young niece Sandra. 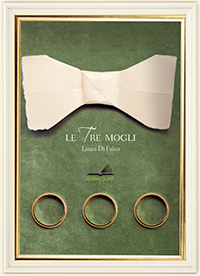