Ramon Martinez is a successful lawyer, a militant atheist and a conventional patriarch. A bad stroke of luck will deprive him of his tongue – and of his speech – and condemn him to live a silent tragicomedy. In this humourpos and unsettling novel, Jorge Comensal narrates the adventures of Ramón and his relatives: Carmela – the wife – who must accustom herself to daily arguments with her speech-deprived husband after many years of peace; Paulina and Mateo – the teenage children – who will have to get accustomed to everyday misery while dealing obesity and onanism; Elodia, the domestic servant, ready to give up avocado and chili in exchange for a miracle cure for her boss; and Benito, the blasphemous parrot who will become the confidant of Ramón. Cancer weaves the threads of Las mutaciones, a story about superstition and greed, about medical consultations and unpayable debts, about scientific research and therapeutic marijuana cultivation, about an egomaniac oncologist moved by religious zealotry and Bach, a heterodox psychoanalyst exploring ways to reach quicker results for her patients. And about the creation of a new language in the face of death.

“The Mutations is a wonderful novel, as tragic as it is comic, as classical as it is contemporary, and above all impossible to forget. After reading it, you’ll wish that there were many more novels by Jorge Comensal ready for you to enjoy—but since this is his first, we’ll just have to wait patiently till his next brilliant book is done.” —Alejandro Zambra

“An implacable speculative exercise (like the disease itself) on the limits of compassion. An uncompromising inquiry that tries to answer a sinister, almost eschatological question: what to do before the news of an incurable disease? Highly reccomended. There are very few first novels that are so mature.”    – Juan Pablo Villalobos

“Through the story of an illness and an exploration of the the fear of death, Jorge Comensal has created a world both absurd and hilarious, yet one that also touches on our darkest emotions. The Mutations is one of the greatest Latin American novels of recent years.” —Daniel Saldaña París, author of Among Strange Victims

“The Mutations, by Jorge Comensal, oscillates masterfully between comedy and tragedy, gathering in its pages a stupendous array of characters before whom the reader does not know for sure whether to pitifully smile or smilingly pity” – Fernando Aramburu, author of Patria

“A feisty first novel . . . [about] the funny, messy unexpectedness of life, death and potty-mouthed pet birds.” — The New York Times

“Gem of ‘La Rentrée littéraire’, Les Mutations can be read like a shot of tequila: bottoms up with a twist of lemon.” Le Temps

“Mastering medicine, psychoanalysis, biology and genetics; challenging with careful language the dark and macabre halo of illness, Comensal takes us with levity, but with intensity, to that time of life where impending death is the antechamber to a potential discovery of the self” – LA REPUBBLICA 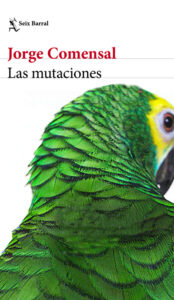