Irene Reyes-Noguerol (Seville, 1997) has a BA in Hispanic Philology at the University of Seville and has completed a Creative Writing Workshop at the Camilo José Cela University of Madrid. Reyes-Noguerol has won several awards, both in national and international story contests and her texts have appeared, so far, in fourteen anthologies. At the age of 18 she published her first solo book: Caleidoscopios. She is currently working on a new collection of stories exploring themes of vulnerability and fragility and provisionally titled Mala mar after one of Lope de Vega’s famous poems.

In April 2021 Reyes-Noguerol was selected by GRANTA as one of the best writers in Spanish under the age of 35. 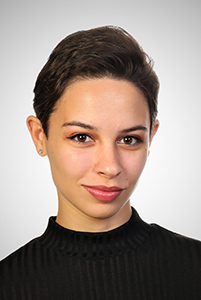