In Tallinn in 1946 a young boy is transfixed by the beauty of a luxurious cream-coloured car gliding down the street. It is a Russian Pobeda (Victory in Russian). The sympathetic driver invites the boy for a ride and enquires about his family. Soon the boy’s father disappears. Ilmar Taska’s debut novel captures the distrust and fear among Estonians living under Soviet occupation after World War II. The reader is transported to a world seen through the eyes of a young boy, where it is difficult to know who is right and who is wrong, be they occupiers or occupied. Resistance fighters, exiles, informants and torturers all find themselves living in Stalin’s long shadow.

Ilmar Taska is best known in his native Estonia as a film director and producer.
Pobeda 1946: A Car Called Victory is his first novel from which two short films have already been adapted. A huge success in his home country, it has already been translated in eleven languges.

“Everyone should read this book”. Sofi Oksanen

“A powerful thriller of set in Soviet-occupied Estonia, this quick read pulls you along each cold railway and into every poorly lit office the characters encounter”. World Literature Today

“The characters and events of Pobeda 1946 form a microcosm of one war-shattered small country’s brutal appropriation of an expansionist power”. The Times Literary Supplement

“Pobeda 1946 is an uplifting, charming and frequently exhilarating novel from a gifted writer”. The New European 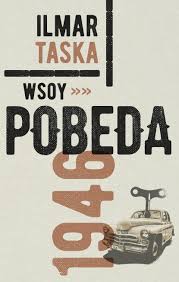