While it started in the middle of the 15th century, the witch hunt in Europe intensified between 1550 and 1650, decades after other important historical events (the Protestant Reformation, the Peasants’ Revolt) influenced its development. It is right in the middle of these one hundred years of infamy, that the story of Anna Thalberg takes place.

Anna is a woman of singular beauty who is accused of witchcraft and taken by force to Würzburg to be tried. Klaus, her husband, and Friedrich, the village priest, will also travel from Eisingen – the city where they are based – to Würzburg – where Anna has been incarcerated awaiting judgement. They will use all available resources, seeking to stop the blind beast of the Inquisition, which is inexorable in trying to drag the woman to the stake.

Witches, werewolves, family spirits and even a demon who theologizes come together in these pages, but their presence is insufficient to hide the true horror, back then just as today: the inhumanity of the institutions, the manipulations and manufacturing of fear, and the arbitrary evil that nests in the heart of the human being.

The jurors Fernanda Melchor, Cristina Rivera Garza and Julián Herbert called Anna Thalberg: “an exceptional story of witchcraft and persecution that acquires a shockingly contemporary validity and that keeps us engaged with a complex and virtuous handling of the point of view.”

“A special emotion. A very absorbing novel showing power mechanisms that are still in force today and where the formal elegance of the narration is transformed into atmosphere and pure feeling.” Julian Herbert

“Anna Thalberg offers us a combination of formal virtuosity with an absolutely gripping rhythm.” Fernanda Melchor

“Anna Thalberg is a novel that challenges us on multiple levels, exploring with a steady hand events only seemingly from the past; a work that has a very clear way of communicating with the present.” Cristina Rivera Garza

“With breathless rhythm and a raging as well as plaintive tone…[the novel] builds a magnificent celebration of the feminine!” – Le monde 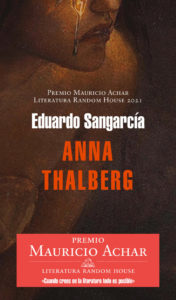