Dimitris Sotakis (Athens, 1973) has published nine novels and one collection of short stories.  Dissonance (2005) was translated and published in Holland by Van Gennup editions.  The Corn Man was nominated for the Readers’ Prize by the National Book Centre in 2007 as well as for the “Diavazo” award.  His novel The Miracle of Breathing (2009) won the award for Best Novel at the Athens Prize for Literature and was nominated for the European Prize for Literature 2011. Sotakis’s works are all published by Kedros in Greece and have been translated in French, Serbian, Italian, Danish, Turkish, Chinese (complex characters) and Macedonian. He leaves in Athens where he teaches Chinese language. 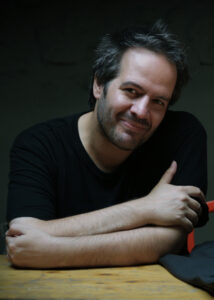