Stranka follows the unnamed narrator’s rapid ascent through the all-powerful and all-corrupt (political) Party. The narrator joins through a friend – because he is told that members are guaranteed employment (in a largely unemployed population) – and spends the initial period of his membership sitting in the party offices’ hallway, waiting for nothing in particular and observing the various Heads, Vice Presidents, Ministers, Secretaries, Undersecretaries, and female secretaries (the variety of bureaucratic titles is mindbogglingly hilarious), as they make their way down the corridor. The day the narrator is noticed by the Head Secretary and invited into his office is the day his astronomical ascent in the Party begins. He is seen as the perfect successor to the dethroned city Mayor because he has no opinions, interests, scruples or personal integrity; he is power hungry, always opts for comfort and does not question authority – these are the characteristics of the optimal Party member. The narrator is manipulated and pushed ahead by Party officials – he is provided with a wife (another Party member), a flat, a car and driver, a free cocaine supply (provided by policemen), alcohol, and as many underage prostitutes as the upper echelons of the Party’s male membership can take. The Party is a snake pit of deceit, power games, sexual abuse and money laundering, eating away at civic life and the possibilities of human decency.

Žižovic’s narrative voice is urgent, brutal and bleak; and wonderfully peppered with dark humour and piercing observations. The Party is a depiction of an organic disease that is unabashed political power, toxic patriarchy and personal greed.

“An anarchoid reading, punk-like, a Croatian Black Mirror, in which a critique of modern society is written as a caricature of a very near future.” Tportal.hr

“The novel Stranka is a grotesque allegory in which the author describes in a furious, cocaine induced, orgasmic pace the ascent of a morally retarded and intellectually under capacitated, but megalomaniacally ambitious and “promising” young man.” 24 sata / Express 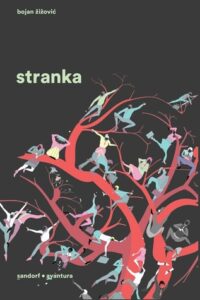