The Son follows one night in the life of a hero with no name, a writer whose life is on the verge of falling apart. One fateful afternoon, his wife leaves him and his long-term conflict with his father, who blames our hero for his mother’s death, comes to a head. Incapable of finding inner calm he steps into the warm Mediterranean night that has fallen in the city of Ulcinj, itself a multilayered mixture of European dimensions, African influences and the communist past. On his journey into the night, the writer meets an assortment of characters: a piano student from Vienna who has abandoned his musical career and converted to Islam, a radical Christian preacher and a group of refugees from Kosovo. In the style of Mihail Bulgakov, the characters meet in the old city of Ulcinj at the dramatically named Square of the Slaves. The Son is the first in Nikolaidis’s ‘doomed generation’ trilogy (a metaphor for the lost generation of the Yugoslav war). Mittel-European in feel, influenced by Camus’s The Stranger, Nikolaidis explores the themes of family connections and abandonment. 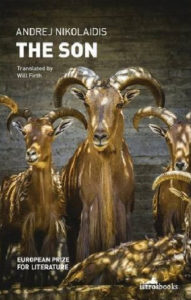