A young woman finds her younger brother’s photo collection. She doesn’t understand why Julian decided to keep those images. They do not portray particularly joyful moments, on the contrary, almost all of them can be seen as the prelude to a domestic catastrophe. Thinking about it, that was her childhood in Veracruz: the anteroom and the aftermath of a continuing catastrophe, the meticulous construction of the ruins that are herself, her brother and her mother. Their father, an unpredictable and violent man, hurt them with the most arbitrary provocation. Julian always got the worst part, so that at some point he raised a wall of silence to protect himself. But silence has the ability to contaminate everything with its own form of violence.
This novel is the attempt to rebuild the puzzle or the photo album that is all memory. The older sister knows that she cannot tell a happy story from these images, can she tell at least one plausible story? And who is the greatest absent in this story, Julian or herself? Did she manage to escape the wreck in time?
With impeccable prose, as emotional as it is precise, Among the Broken reminds us that we are our memory: a kaleidoscope much more broken than colourful.

WINNER of the MAURICIO ACHAR Award 2019

“…for being an impeccable narrative construction, an agile and precise story about a family broken by violence and silence. An intimate archaeology based on various resources of memory such as photographs, lists and personal definitions. Among the Broken is an intelligent and emotional novel that reflects on the way emotions have been transformed at the beginning of the 21st century.” – The Jury: Cristina Rivera Garza, Fernanda Melchor, Julián Herbert, Andrés Ramírez.

“…a female voice talking about issues that women have begun to talk about little by little: violence within the family, not only physical but also psychological, and the way in which these patterns of violence develop with parents, siblings. A very emotional and very well achieved novel.” – Fernanda Melchor

“A book that hits you and moves you from page one.” Espacio Público

“Powerful, brave, fragile, direct, precise, emotional, but above all, honest, that’s what the writing of Alaíde Ventura Medina is like.” Revista NOROESTE 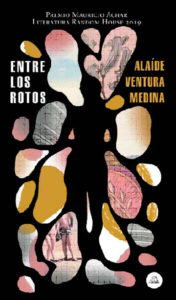